If you're a loyal reader of Hungry Paprikas, you know my obsession with eggplant is real. So I naturally gravitate to any eggplant dish I find. Lebanese Moussaka is one of those eggplant dishes that I love because it's easy to make, completely vegan so it feels so light, and it has chickpeas. Who doesn't love chickpeas? It's also referred to as Maghmour, which is how I initially discovered it.

What is Lebanese Moussaka or Maghmour?

You might be familiar with the term 'Moussaka' as the Greek layered casserole type of dish. But believe it or not, the word 'Moussaka' is actually an Arabic term meaning 'cold' and it's a common Middle Eastern dish that's actually made slightly differently in each Arabic country. In Iraq, the closest version of 'Moussaka' is called Tapsi Betenjan or what I called a Mediterranean Eggplant Casserole (it's so good - try it!!). But I digress - back to the Lebanese version.

I discovered this Lebanese Moussaka at a restaurant in London when I used to live there, and I fell in love. It's an eggplant, chickpeas, onion and tomato dish flavoured with garlic and a few spices, typically eaten chilled with pita bread. The eggplant is traditionally fried and added to the onion, tomato and chickpeas that are cooked together in a pan, kind of like a stew.

I desperately wanted to share the recipe with you and wanted it to be as close as possible to the authentic taste, so a few voice notes to my Lebanese best friend later, and here we are. I have all her mama's tips! Thanks Jackie!

What ingredients do you need?

The ingredients are really simple and I typically have most of them at home. I use canned chickpeas but you can also use pre-soaked and pre-cooked chickpeas in this recipe. For the spices, you can adjust the chilli powder to your liking.

How do you make Lebanese Moussaka?

This dish comes together really quickly once the eggplant is roasted. In fact, that's the first thing we do while we prepare everything else. Here's how to make it:

How do you serve it?

Lebanese moussaka is typically served chilled with pita bread, and eaten by scooping it up using your hands. I love to eat it hot as well - it really works beautifully both ways. I've also had it with rice and it didn't disappoint. You can garnish it with freshly chopped parsley or cilantro.

My friend's mom also serves it in layers, by firstly adding the eggplant layer to the bottom of the plate, then the chickpeas, then the tomatoes and onions. I'm usually in a rush so I just mix it all together. Either way - this recipe is amazing and you need to try it! If you do - be sure to leave a review and a comment, I love hearing from you. 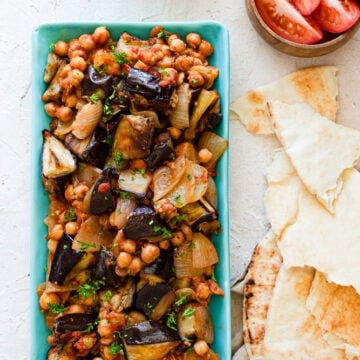 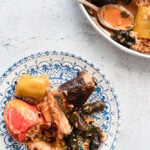 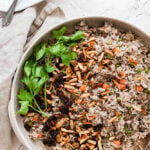 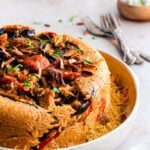 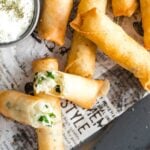 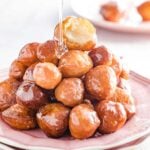 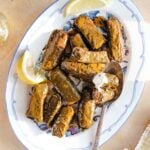 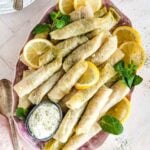 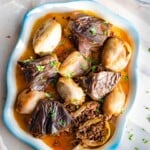